Lanzarote is the easternmost of the seven major Canary Islands, which form in the Alan tables ocean is a seventeen autonomous regions of Spain. Lanzarote is situated approximately 140 kilometers west of the Moroccan coast, and about a thousand kilometers from the Spanish mainland. Arrecife Airport is the main transport. Lanzarote measured from north (Punta Fariones) to south (Punta Pechigera), about 58 kilometers and the largest east-west extension of 34 kilometers. To the south of Lanzarote is 11.5 kilometers, the island Fuertaventura. Lanzarote is an island of volcanic origin. Lanzarote has a year-round mild climate and low rainfall, as the trade winds, raining on the relatively flat island mostly not. The annual average air temperature is at 20.5 degrees. The monthly average temperature in August 24.7 ° C in January and 16.9 ° C. The water of the Atlantic Ocean varies by the swelling of cold deep water off the northwest African coast and the Canary Current between 22 ° C in summer and 17 ° C in winter. That makes endurable in connection with the tradewinds the sometimes high summer temperatures. Lanzarote has a sparse due to the low rainfall flora. So here's reign), water-storing succulent, drought-resistant) and salt-tolerant plants) vor. Places to visit on Lanzarote El Golfo, half sunken crater with a lagoon, the Papagayo beaches, Jameos del Agua, Cesar Manrique, a work of art in lava tubes, the Mirador del Rio vantage point north of Cesar Manrique, the Cueva de los Verdes, one of the longest lava tube in the world, the Jadin de Cactus, cactus garden by César Manrique in Guatiza and the Fundacion Cesar Manrique Foundation and Museum in Teguise. 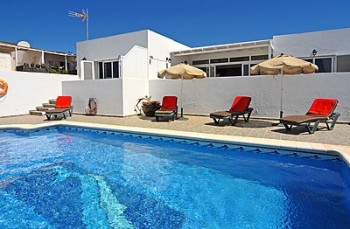